CANBERRA, Australia—Chinese authorities aggressively expanded the scale of internment camps in Xinjiang this year, according to a new study, even as China’s program of mass detentions of Muslims in the region started to draw international scrutiny.

An examination of satellite imagery released Thursday by intelligence analysts from an Australian security think tank mapped the expansion of 28 detention camps in the restive frontier region. Their analysis found that total floor area of these facilities grew more than 465% from early 2016, with the greatest growth occurring in the three months ended this September. 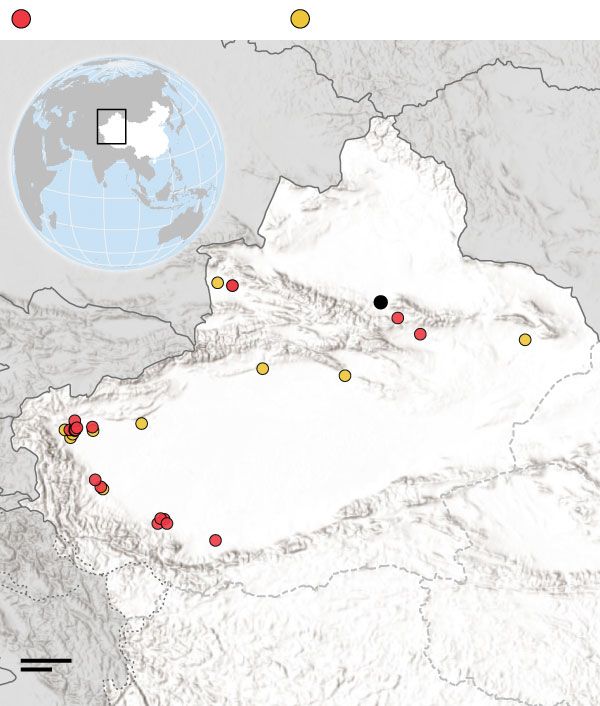 The report by the Australian Strategic Policy Institute, which provides research for Australia’s military, adds new details to a growing body of evidence about one of China’s largest suppression campaigns in recent years. It shows that the building of detention facilities accelerated at a time when former detainees or their family members began to speak out and international media, including The Wall Street Journal, reported details of the program.

U.S. officials and United Nations experts estimate that hundreds of thousands of people, mainly from the largely Muslim Uighur ethnic group, may have been incarcerated in the detention centers. Uighurs living outside China have reported disappearances of family members, with some saying relatives have died in detention or soon after their release.

While Chinese officials denied the existence of the mass detention program as recently as this summer, in recent weeks, Xinjiang’s governor and other officials have portrayed the detention centers as well-equipped vocational schools that are part of a program to eradicate the extremist violence that buffeted Xinjiang for years.

A spokesman for China’s Foreign Ministry declined to comment on the Australian report’s findings but denied that people were being “detained” in the Xinjiang camps. At a routine news briefing Thursday, Lu Kang described the facilities as “training centers” that support local development and help maintain social stability.

China’s human rights record comes up for review next week by a U.N. panel in Geneva. Ahead of that hearing, the U.S. government, as well as other countries including the Netherlands, Germany, Sweden, and the U.K. have all raised questions about the situation in Xinjiang. Britain’s foreign secretary, Jeremy Hunt, told British lawmakers on Tuesday that he raised Xinjiang with his Chinese counterpart after British diplomats visited the region in August and found that reports on detentions there are “broadly accurate.”

The Australian think tank likened the rapid expansion of detention centers in Xinjiang to China’s island-building project in disputed areas of the South China Sea. “The Chinese state has changed the facts on the ground in Xinjiang so dramatically that it has allowed little time for other countries to meaningfully react,” its report said.

The report analyzed satellite data and cross-referenced findings with construction-tender documents, as well as evidence collected from other official sources, activists, academics and nongovernment organizations. While German researcher Adrian Zenz has estimated that Xinjiang may have as many as 1,200 facilities, the Australian researchers focused on a sample of 28 camps.

As of the end of September, those facilities sprawled over an area more than 40 times as large as the Los Angeles Coliseum, the researchers said, covering almost 700 acres.

Satellite imagery of all 28 facilities showed high-security features resembling prisons, with significant fencing to restrict the movement of people inside, watchtowers, and strategic barricades with only a small number of entry points. These camps, the report concluded, are “punitive in nature and more akin to prison camps than what the Chinese authorities call ‘transformation through education centres.’”